RECENT EVENTS
(Click on a link to jump to an event)

34 “My food is to do the will of Him who sent Me and to finish His work,” Jesus told them. 35 “Don’t you say, ‘There are still four more months, then comes the harvest’? Listen to what I’m telling you: Open your eyes and look at the fields, for they are ready for harvest.  36 The reaper is already receiving pay and gathering fruit for eternal life, so the sower and reaper can rejoice together." –John 4:34-36, HCSB


Starting Sunday, April 28, 2013, the Crossing will be holding a special six week study aimed at preparing us all for the work of an evangelist.  The Lord Jesus Christ calls us all into action when it comes to being a witness for Him.  Everyone is a missionary to someplace, whether its your home, your neighborhood, your workplace, or a thousand miles away in another country.  God calls all of us to share the wonderful and eternally impactful power to save that each of us have experienced in His Son, Jesus Christ.  In Acts 1:8, the Lord Jesus Christ calls us all to go out into all the world, but part of that is world is Saint Albans in Kanawha County in West Virginia.  The model can be applied to you wherever you are, but the important thing is to be ready to serve and speak on behalf of our Lord and Savior Jesus Christ.
The study starts at 6:00 PM at the Harrison Avenue Campus and everyone is welcome to come and become more devoted to missions, near and far, and to become more trained to carry the Gospel to "all the world." 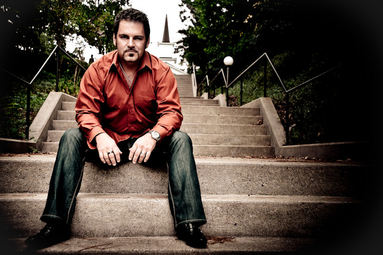 This past Sunday The Crossing was host to Christian musician Rod Propes!  Mr. Propes has been performing for more than 20 years.  During the concert he performed Christian music of all different styles from favorite hymns to soulful Gospel to contemporary.  If you missed hearing him Sunday it's certainly worth giving his music a listen.  He has a tremendous voice and kept everyone smiling with his sense of humor.

If you want to learn more about a terrific artist who has a tremendous testimony and ministry for Christ you can visit his website:
RodPropes.com

Concert at the Crossing

On February 9th the Crossing held a concert featuring two Christian indie-rock bands.  The concert was at the Harrison Avenue Campus (2031 Harrison Avenue, St Albans).  Doors opened at 6:30 PM and the bands kicked the night off at 7:00.  Admission to the event was $3.00 and concessions and cool swag will be available.  The proceeds of the concert and concessions are for special Youth group projects, like mission trips and fellowship activities.  For those who missed it, whenever possible you should see both Party or Die! (pictured above) and Coyotes in Boxes live!
Below is a music video sampling titled "Rocking Horse" by Coyotes in Boxes to give you a taste of what it was like.

On December 3rd the Crossing held its first ever Parents' Day Out, where any parents were able to drop off their children for a few hours and catch up on shopping, work, or some much needed relaxation time, while the Crossing's most attentive childrens' teachers cared for them.  The kids had a nice meal and plenty of fun activities to make the  day fun for them as well.  Those parents and kids who came seemed to enjoy what we hope will be an annual opportunity to help relieve the stress that comes with the season.

AND IF OUR GOD IS FOR US TOUR COMES TO CHARLESTON!

On November 5th TRUST travelled to see Chris Tomlin in concert at the Charleston Municipal Auditorium!  The concert was part of Chris Tomlin's And if our God is for us... Tour.  In addition to Tomlin,Lou Giglio and Christy Nockels performed.  Click here to get more info on the tour

Click here to learn more about the Crossing's first revival as a unified church!

Sunday, October 23rd The Crossing held a pair of special services in honor of Saint Albans High School's Fall Sports teams.  Red Dragons from the Football, Girls and Boys Soccer, Girl's Volleyball,  Cross Country, and Golf teams, as well as the Cheerleading squad  (though no one would have been turned away), were invited to hear a message from Raleigh Sadler in both the morning and evening services.  His message that evening followed by a cook out with hot dogs, hamburgers, and many, many tasty deserts provided by the church and its members.  After the message a concert featuring local hip hop artist Dizz was held finishing the night with his Christ centered rhythm and rhymes.
This event was totally free and a token of our church's appreciation for our city's high school teams.  We hope everyone had a great time, and want to invite the members of all these teams, as well as those not in the Fall, to come back to The Crossing anytime.

To find out more about:

Light Up the Night Saint Albans

This July was quite busy for The Crossing.  First with Move Up Week for the Youth and their trip to Spirit Song 2011 at Kings Island, then with Vacation Bible School the week after.  The state Youth Conference was held here on July 23, and a group of college students from  North Greenville University in Florida spent a week helping out at the church and visiting the community to spread news about the church and our Lord Jesus Christ.  Not to mention all the things that the Crossing Kids were doing.  Then on the very last day of July, our church hosted an ice cream social to commemorate and celebrate our month long focus on the Pure Water, Pure Love ministry!  To see some more in depth articles about these events see the links below:

Move Up Week and King's Island

And most of all pray that The Crossing, in whatever it does will continue to follow the Lord's directing in all that it does!      . 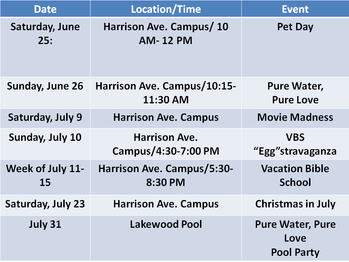 The Crossing's One Year Anniversary!

On Sunday, May 29th The Crossing celebrated its first full year as one body of believers!  There was a cookout with hamburgers, hotdogs, mac and cheese, and a wide variety of homemade and store bought desserts.  At 6:00 PM the commemoration of our time together began and the hall quickly filled with members of all ages.
The time was one of good fellowship and thoughtful consideration of the wonderful work God has been doing among and through us since we came together.  Whether you attended or not though, everyone can keep the church in their prayers that the Lord will continue to use us for His work and glory, and that we all will strive to live lives more fully devoted and truly close to our Lord Jesus Christ in all the years to come!